A couple of days ago, I was looking for a certain cable in one of my drawers where suddenly I stumbled upon a router that was laying around. Immediately I wondered…Could I hack it? 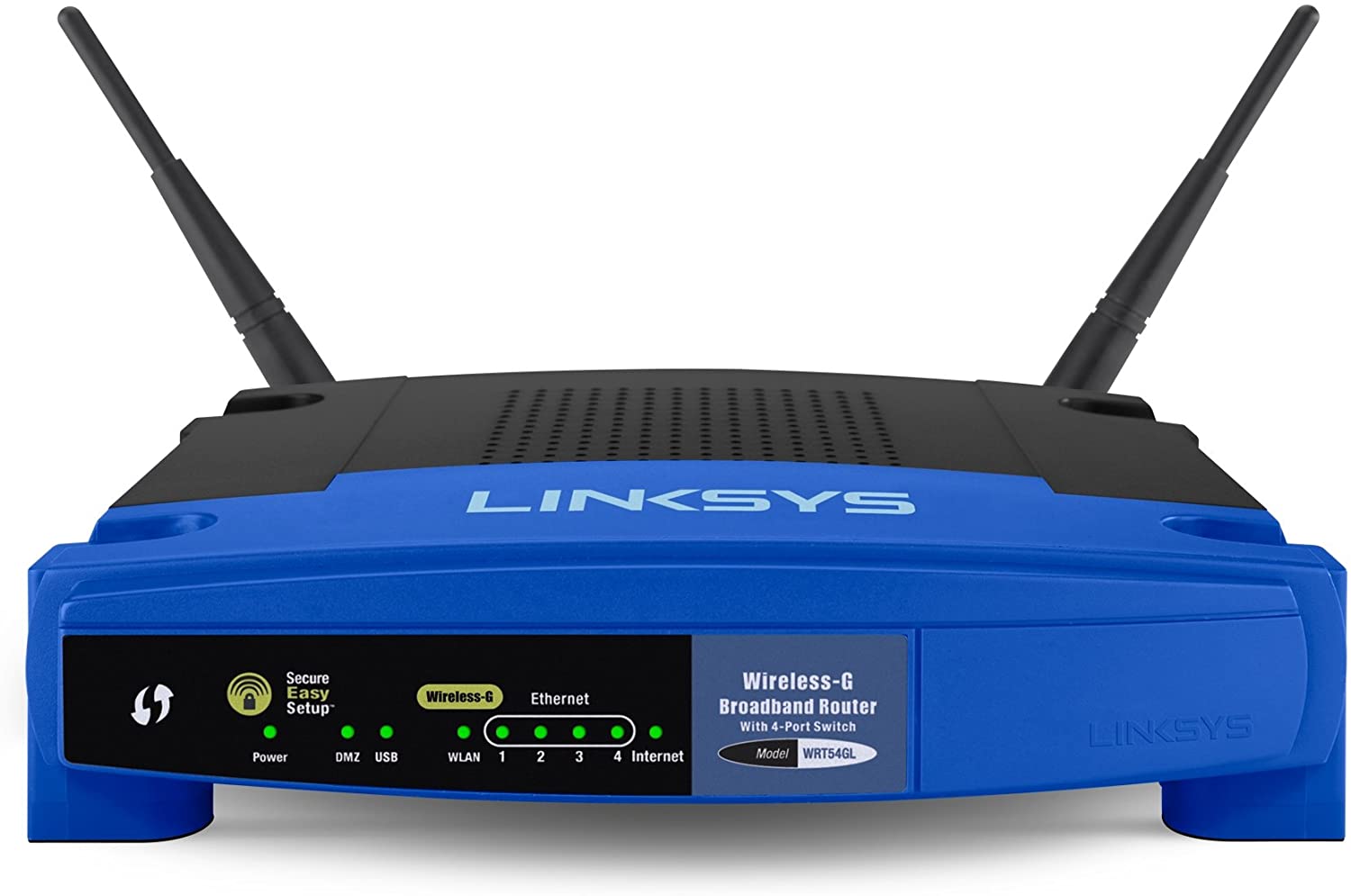 It worked well for me because I was just looking for a new project to pick up on, and I had no prior experience in tinkering with such devices and I thought it could be an interesting challenge.

I connected the router to my computer and right away jumped onto the research. I started off with a good ol’ port scan in order to get a good grasp of the router’s interfaces and my potential attack vectors.

Unsurprisingly, looks like all we got to work with is the web server. Off we go then.

Browsing to the router’s website presents a login prompt, to which I authenticate with the default credentials, and shortly afterwards I’m introduced to the following control and management page. 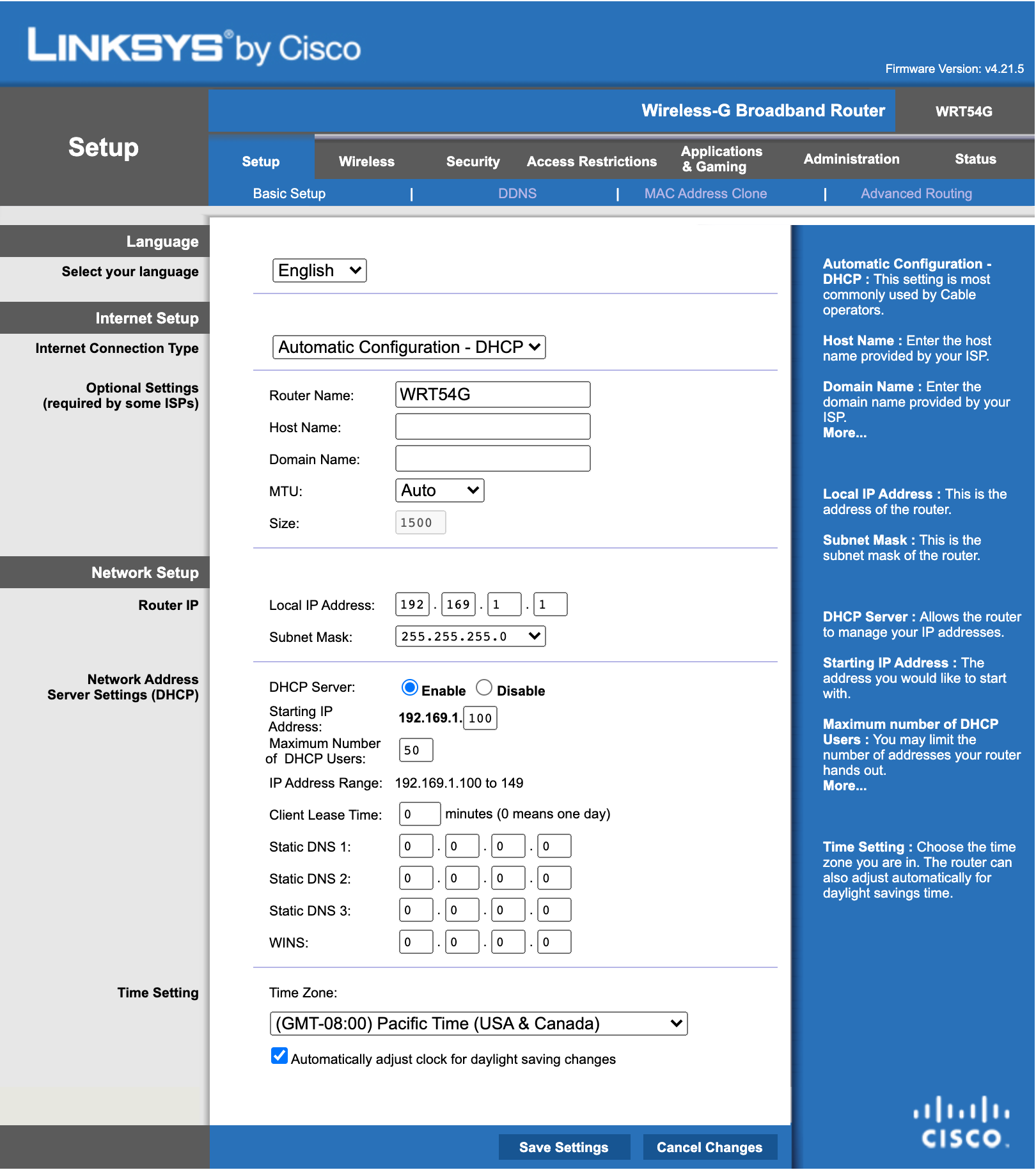 Initially, I searched for potential inputs from the client when I came across the Diagnostics page. 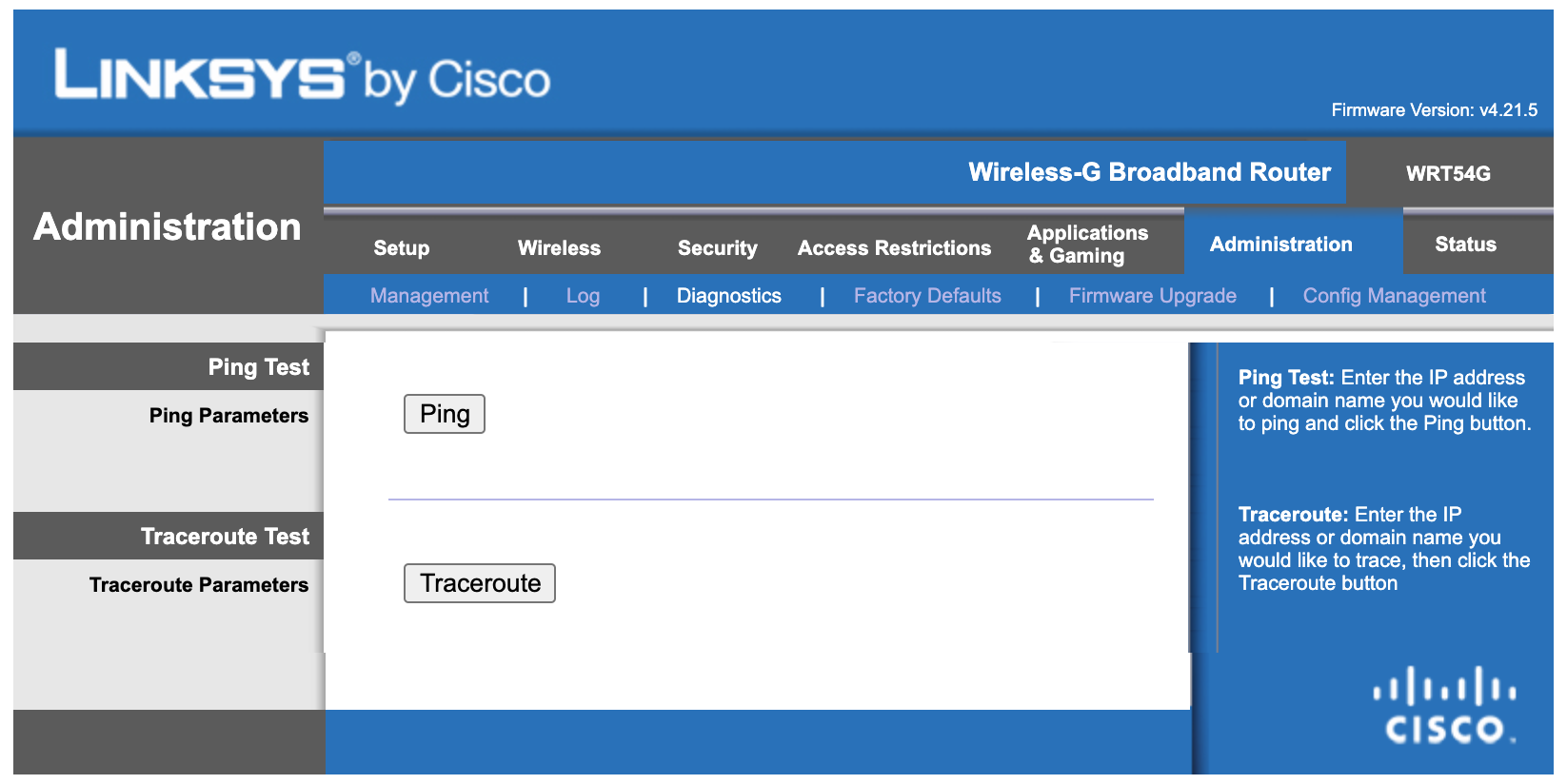 I thought it could be a good place to apply the oldest blackbox technique in the book - Shell Injection. Unfortunately, client-side validation was applied.

In order to overcome it, I intercepted the request using a proxy.

Sadly, it seemed to have no effect at all on the ping request.
Needless to say that I also attempted the same on the Traceroute Test interface and many other places but without any luck.

At this point I was done with doing Blackbox attack variations, mostly because I had no reason to.
I decided to download the firmware, extract the file system, and begin messing around with what’s available on the router.

Intuitively, I started auditing the source code of the web application, because that’s what I could access directly as an attacker.

Basically the web application is a bunch of .asp pages served through the httpd that is running.

First thing I did was inspect Ping.asp in order to see how the ping invocation is done since I wanted to know what failed my shell injection. It took me a few minutes to realize that the web application isn’t the one that is doing the ping itself as I imagined it would with something like

But rather what actually happens is that it passes on the request to the httpd which handles it.

Consequently, when searching for /apply.cgi which is where all the HTTP requests are being sent to, the only matches are from the web application with <FORM> elements and the httpd.

Generally, the sole job of the web application is to pass parameters to the httpd which actually does the heavy lifting. I now realized that sooner or later I’d have to reverse the HTTP daemon that is running on the router in order to see how it handles the requests.

I opened up Ghidra, filtered the symbol tree to “ping” and found a function called ping_server. 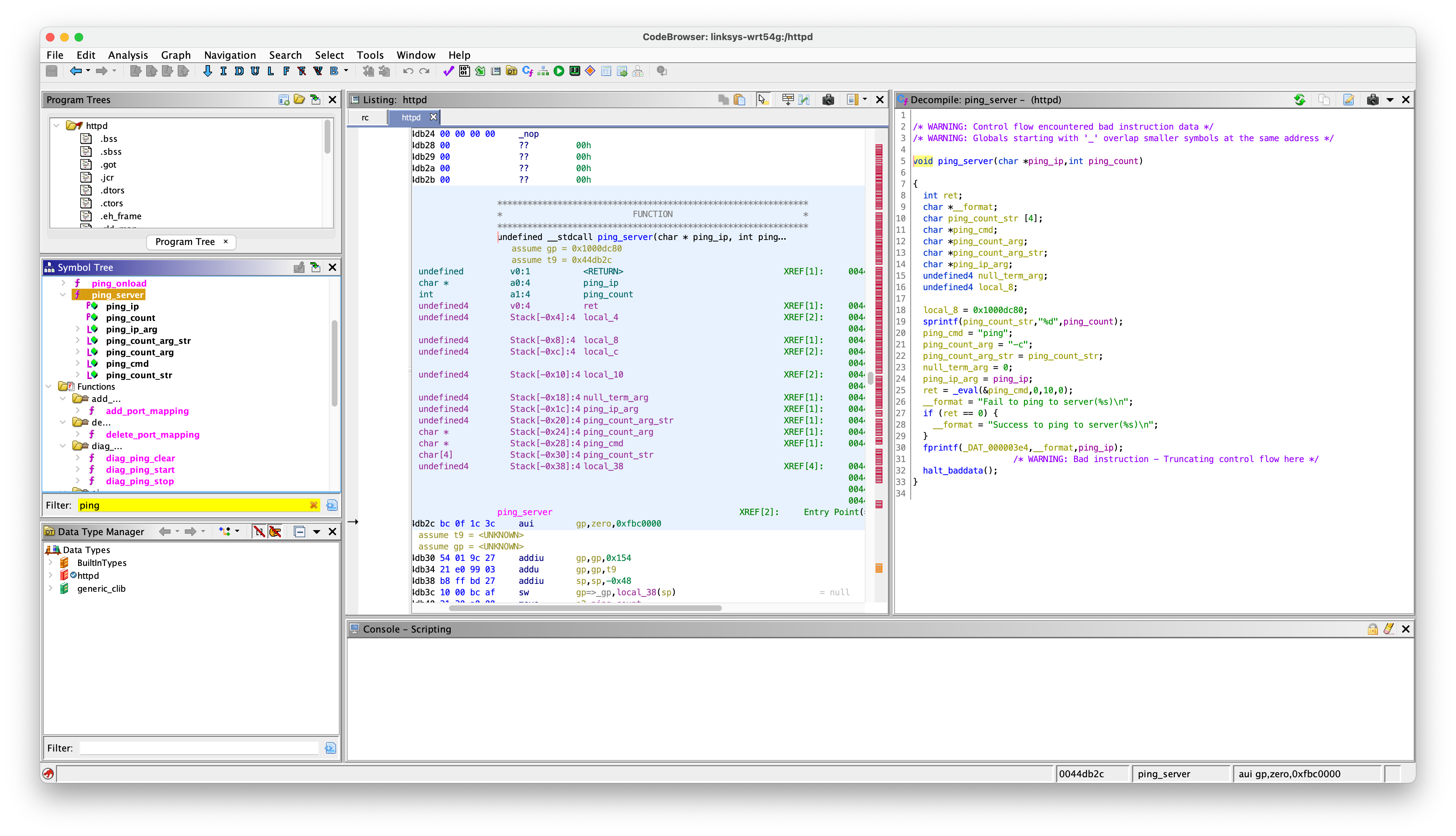 Worth mentioning that none of the binaries that were present within the firmware had any debug symbols, and that they were stripped.

However, with great help of Ghidra’s decompiler, although a bit inaccurate, I concluded that what the function does is eventually call a function named _eval like so.

ping_times and ping_ip being the arguments that are supplied from the web page which can be seen above.

Naturally, I went on to see how _eval handles this input. Accordingly, I had to figure out where the symbol is located since it’s an imported symbol that does not reside within httpd itself.

_eval is located within libshared.so.

The _eval function itself is relatively long, but the important part is that it forks and then uses execvp as opposed to system. Therefore, a shell injection is not possible because the constant "ping" is the program that will be launched regardless of my other arguments.

I tried to see if I could escalate my control via ping or traceroute with certain arguments but I didn’t find anything interesting. I also searched for other references within httpd to _eval in the hope that I’d find a place in which the first argument, the program, is user-controlled.
As expected, I couldn’t find such a scenario.

Well, why not at least try to think simpler than that?
Let’s begin by searching for references for system within httpd. 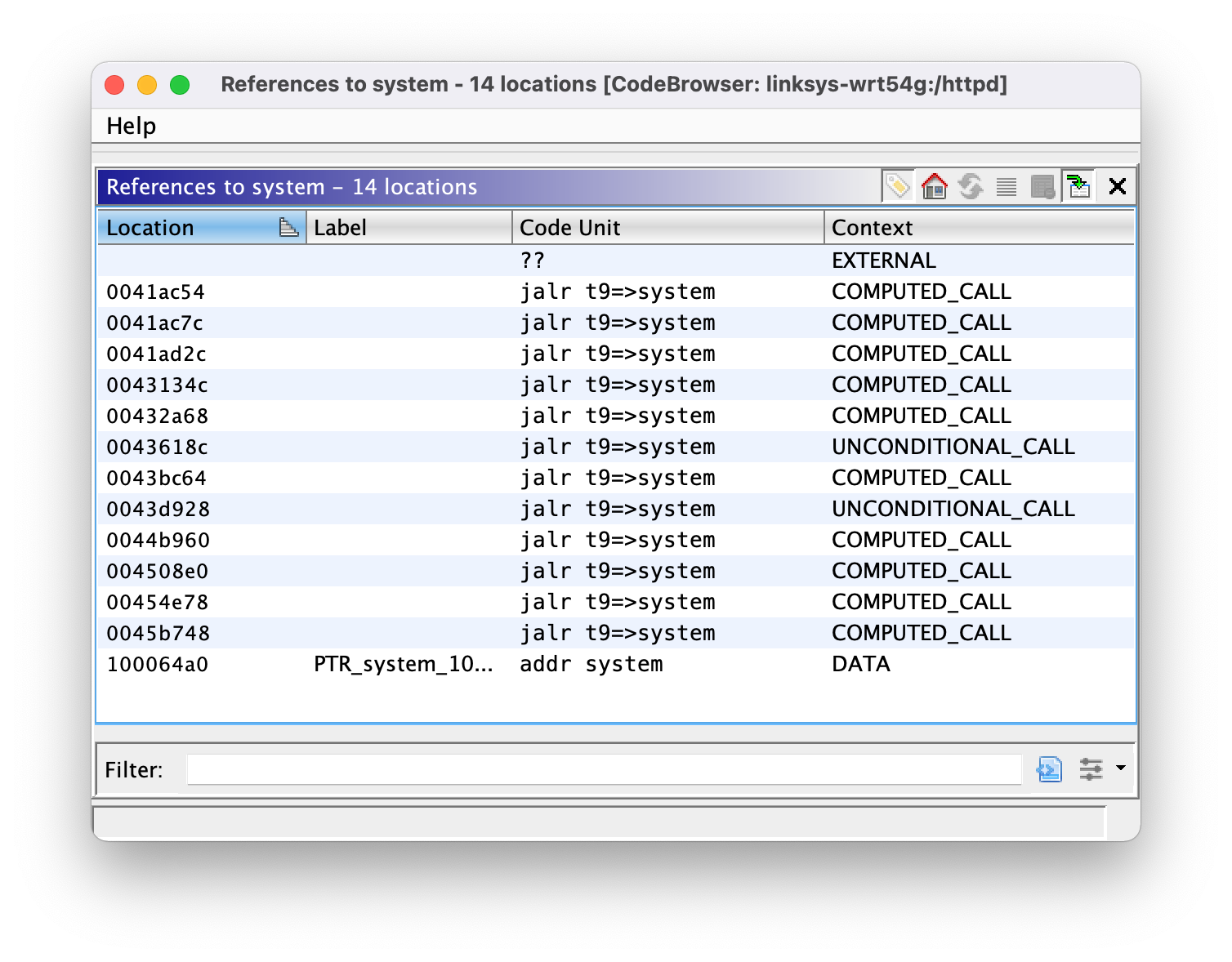 There weren’t too many in the first place, and all of them were actually safe since an attacker couldn’t meddle in between.

With the exception of a single spot 😮

You can see that what happens is that a variable called puVar1 is formatted into a cp command using snprintf, and then the command is invoked with system.

The variable puVar1 is loaded from nvram_get("ui_language"). NVRAM stands for Non-Volatile RAM which is data that “survives” a reboot, in this case, the language of the user interface since we don’t want it to change whenever the router restarts.

Luckily for us, we can control this value! 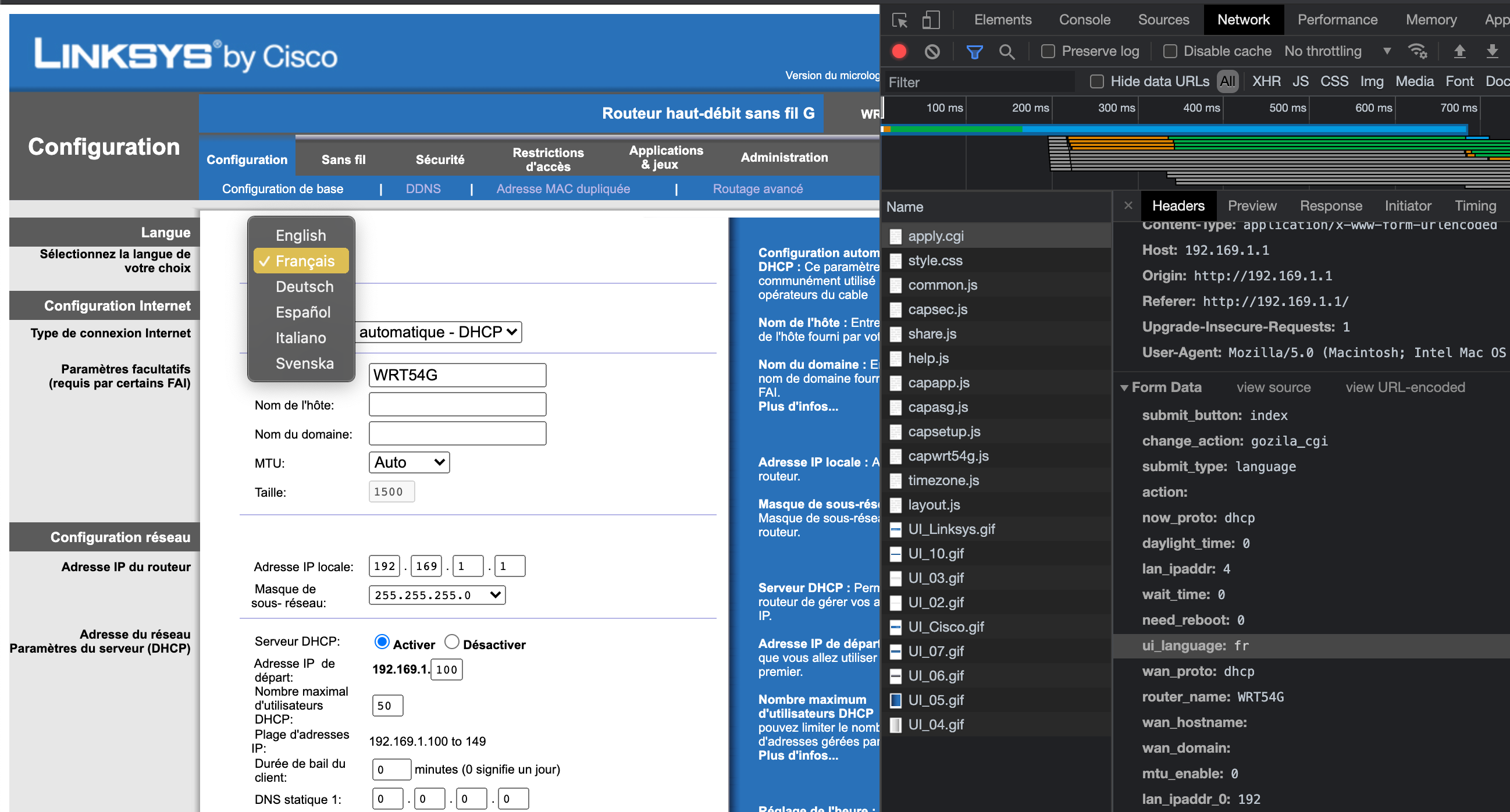 I looked for the place from which you can change the language on the web page, and I inspected the request that was being sent and I noted that in fact the ui_language parameter is being changed, in my case from "en" to "fr".

Seems like all we have to do is change ui_language to ;{malicious command}; in order to get code execution. Let’s give it a shot with ;reboot;.

Well, while corrupted, a web page returned and therefore we can deduce that the device and the web server are still functional, and didn’t experience any reboot.

At first I thought that maybe I have insufficient permissions to reboot the device but I highly doubted it given it’s a router, or that reboot is not in the $PATH, so I tried pinging myself with absolute path in order to confront both of those issues /bin/ping 192.169.1.100. Still, no luck.

Currently, I revisited the vulnerability with a deeper inspection.
If you paid close attention you noticed that the vulnerable function’s name is do_upgrade_post.
This must mean that I have to issue an upgrade in order to trigger the bug!

A few things I had to do beforehand:

Yes! We got code execution.

I can only assume that the developers didn’t think this was susceptible to shell injection since the way in which you change a language is via a dropdown and you can’t provide free-text on the interface.

Although executing commands on the router is great, I still lack an interactive shell which is my true goal.

In order to cope with that, I needed to upload a reverse shell onto the router.
Though, how could I upload files? Originally, I thought of uploading the file with a command like

Though, I then recalled that I couldn’t do so due to the size limitation on snprintf.

I’m limited to 56 characters, two of which are the ; at the beginning and at the end, so essentially 54 characters. Uploading it by chunks with echo {chunk} >> revshell would take a very long time and I didn’t want to go down that path.

At this point in time, I realized that wget is present on the device!
I compiled a reverse shell and set up an HTTP server so that I can pull it to the router.

I automated the process of changing the ui_language to a command in conjunction with issuing a firmware update in order to execute a shell command. If everything works correctly, the firmware update request should block since it’s now executing the reverse shell (given that it doesn’t fork).

We can tell that the router attempted to download the binary from our HTTP server since we received the request. Sadly, it is clear that after I issue the last firmware upgrade which should invoke the reverse shell, it returns immediately. More so, we can see that a shell doesn’t open up on our handler.

For the sake of assessing whether the file was uploaded successfully, I used the AND (&&) operator.

If the file was present, I would receive an ICMP packet on my end, else, I wouldn’t.

Well, what is it then? Why wouldn’t it work?

I wanted to be able to get the output from the shell commands that I’m running in order to ease on the debugging process. I thought of a couple of ways to do it:

I started off with the attempt to upload a web shell onto the www directory. When I browsed to it, the web server replied with 404 Not Found. I inferred that the web server corresponds to predefined constant paths like /Ping.asp, and that it doesn’t simply lookup the files within www.

Having that in mind, I attempted to overwrite an existing page, hoping I’ll now receive my own crafted page. I was surprised to see that it still served me the original one. It seems that the server caches the pages in memory when httpd starts, and doesn’t reload the pages until a reboot occurs.

I then recalled the ping interface.
The output was the exact output of the ping command. I bet that it writes it to a file and that the web server reads from that file.

I opened my disassembler and looked for strings that contain a / indicating a file path, and ping. 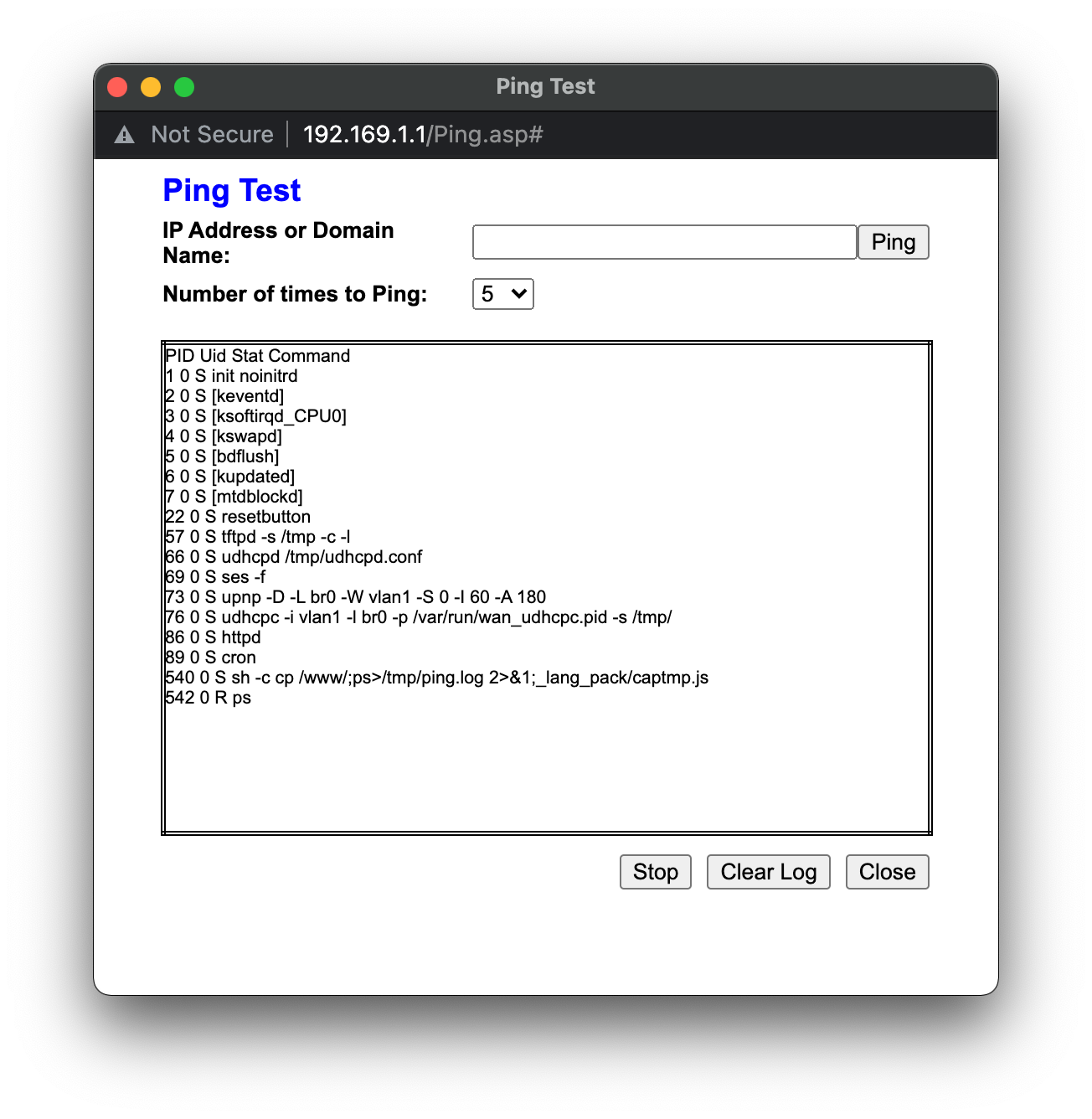 Awesome! We can now see the output of our commands.
We can even see ourselves with PID 540 🙃

Next thing I did was run ls /tmp to ensure the reverse shell is in fact there and is executable,
which it was.

I tried running it and I received SIGSEGV on my ping log. Seems to be that I failed to compile the reverse shell correctly to the target.

It’s crucial for me to state that I wanted to be able to compile and run my own program.
That is why I did not attempt beforehand to deploy a reverse shell using bash, nc, python, perl, etc. Though, even if I wanted to, none of those were available on the system.

Throughout the process I learned that MIPS, which is the architecture that the router runs, has a lot of different variations, and that compiling a program to run on the device turned out to be a bigger challenge than I expected.

When I approached to compile revshell.c, I thought that all I’d have to do is install gcc for MIPS so I just did mips-linux-gnu-gcc -static revshell.c -o revshell but boy was I wrong. I tried passing various arguments to the compiler, and using different compilers, but none of which seemed to run successfully on the router. I also tried just assembling native MIPS code with as.

Eventually I came to know that the vendor publishes a toolchain which contains a bunch of tools that are relevant for the device, amongst them is the compiler that is used to build the programs for the target.

Let’s experiment and see if this toolchain is any good.

Mission accomplished! Full interactive shell.
The repository of the exploit is available here.

Thank you for reading.